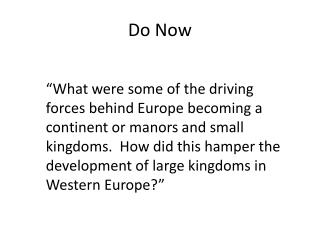 Do Now. “What were some of the driving forces behind Europe becoming a continent or manors and small kingdoms. How did this hamper the development of large kingdoms in Western Europe?” . Chapter 13. Section 2: Feudalism in Europe. Invasions of Western Europe.