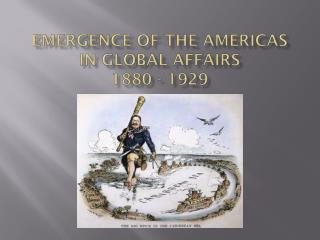 Emergence of the Americas in Global Affairs 1880 - 1929. Civil War to turn of the Century. From Colony to Superpower Gilded Age 1877-1893 1882 must control an isthmus /canal Many domestic problems- time of rapid change (railroad, steam, telegraph ,) Low concern for external threats

The Klan's Influence and Growth - . we will be exploring the growth and the influence of the kkk in the 1920s. early

Speed Up, Stretch Out, Shut Up! Labor in Industrial America - . tah osceola county 19 september 2009. cordwainer. “the

Congressional decision-making: How does it work? Ch. 7 - . what five factors influence reps.’ decisions in congress?

Latin American Policies - . chapter 22 section 4. panama. the country of panama is an isthmus, a narrow strip of land

SMSC Global affairs discussion - . where who why discuss. uganda has rebounded from the abyss of civil war and economic

The Gilded Age: Industrialism and Its Discontents - . many slides generously (and with permission) taken from ms . susan

America’s First Steps Toward Global Superpower - . turn in pictowords. finders keepers?. should you keep a wallet

Conquest in the Americas - . section 15- 1 pp. 472-476. preview questions. what were the results of the first encounters

National Export Initiative and Sourcing in the Americas - . radicispandex : your perfect partner. * u. s. manufacturing *