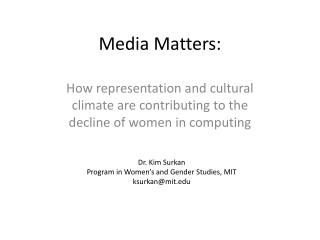 Media Matters:. How representation and cultural climate are contributing to the decline of women in computing. Dr. Kim Surkan Program in Women’s and Gender Studies, MIT ksurkan@mit.edu. Media Consumption is Growing. Advantages of Social Media Marketing Strategies to your Business. - There are over 3 billion internet users—and over 2

Year 9 Persuasive Media - . what is media?. can you write your own definition of media? don’t forget to include a

Do Something... That matters ! - Get your fire back. it’s not over until god says it’s over. start believing again.