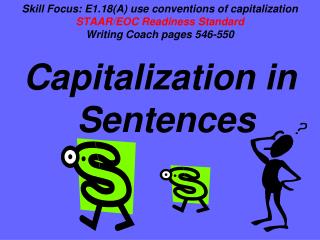 Vocabulary Sentences - . every single word must be spelled correctly to earn credit for the sentence. each sentence must

Lesson one Simple Sentences - . 1- center the title. 2- indent the first sentence 5 spaces. 3- spaces between lines and

Capitalization - . wc 1.7. learning objective. things you capitalize: all proper nouns, words at the beginning of

Simple/Compound Sentences - . ms. christie 2013-2014. sentences. sentences are groups of words that have a subject and a

Capitalization - . ghounaim debian al- sebaie university i.d : 434910151. capitalization. in english, there are many

Sentences - . sentences. objective  by the end of this section you will be able to: identify the different parts of a

Capitalization and Punctuation - . a project la activity. why? . writers use capital letters and punctuation marks to