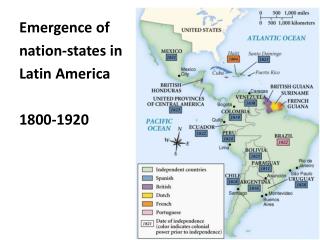 Emergence of nation-states in Latin America 1800-1920. Brainstorm. What was the situation like in South America prior to independence from Spain and Portugal in the early 1800’s? Political, economic, social, cultural, environment. Causes of Latin American Revolutions.

Unit 4 - Imperialism - . the new industrial world. the nation-state. the trend in europe had been toward the dismantling

Nation Building and Economic Transformation in the Americas, 1800-1890 - . chapter 23. independence in latin america.

The united states in latin america - . economic and social trends in 20 th century latin america, and the u.s. response.

Latin American Policies - . chapter 22 section 4. panama. the country of panama is an isthmus, a narrow strip of land

Why Latin? - . why would anyone want to take

Nation Building in Latin America - . 21.4. nationalist revolts. revolutionary ideas in latin america were sparked by the

The United States in Latin America - . chapter 23, section 3. a canal across panama. isthmus- a narrow strip of land

The United States and Latin America - . the monroe doctrine. 1823 – president monroe warns european nations not to

Nation States - . humans have always partitioned space to separate themselves from other human groups. this is similar to

The United States and Latin America - . ant 105 survey of latin america. the united states is practically sovereign on

Nation Building and Economic Transformation in the Americas, 1800-1890 Chapter 23