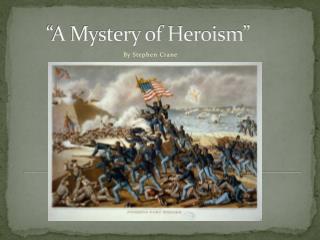 “A Mystery of Heroism”. By Stephen Crane. Stephen Crane. Associated with the Naturalist movement First work “published” in 1893 Maggie : A Girl of the Streets The Red Badge of Courage (1895 ) Silhouette Photography - : if you are looking to add some colour and mystery to your photos then you can use silhouette

Chapter 4: Redemption and the Paschal Mystery - . the mystery of redemption. 1. the inauguration of the paschal mystery.

The Da Vinci Code: What to Make of It? - Robert c. newman what’s the buzz? the da vinci code is a novel that has

The Westing Game - . http://www.myteacherpages.com/webpages/cbarnes/files/raskin_1978_the_westing_game.pdf. lesson one

The Curse of King Tut - . how it began. a man who funded the dig died shortly after they found the tomb. his name was

Coach Don Meyer - . yesterday is history. tomorrow is a mystery. today is a gift and that is why we call it the present.

Section 1 - . introduction to biochemical principles. chapter 1. biochemistry: an introduction. life: it is a mystery!.

The Mystery of Scotland - . scotland’s loch ness monster. where is loch ness?. loch ness is located in the scottish

BERMUDA TRIANGLE - . what is bermuda triangle. greatest mystery of the world  devil’s triangle a region of the