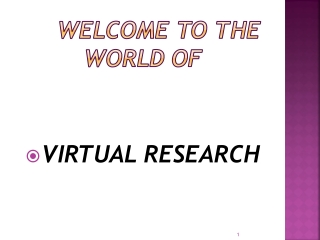 welcome to the world of. VIRTUAL RESEARCH. BAXTER. HARRY, Before and after. LOST IN DATA. IN THE VIRTUAL WORLD. What is research ?. RESEARCH, IN AND OF ITSELF, IS A PHILOSOPHICAL METHODOLOGY, IN A SCIENTIFIC FORM GUIDED BY A SPECIALIZED ETHICAL SET OF STANDARDS. POINTS OF RESEARCH.