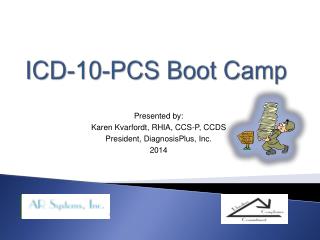 ICD-10-PCS Boot Camp. Presented by: Karen Kvarfordt, RHIA, CCS-P, CCDS President, DiagnosisPlus, Inc. 2014. Things will never be the same once we switch to ICD-10-PCS! Complete overhaul of the procedure classification system as we know it today. Physical Boot Camp - . 5.6a explore the uses of energy including mechanical, light, thermal, electrical, and sound

ICD-10-CM/PCS Implementation - . senior managers date presented by: ____. the 5 things you need to know today about

BOOT CAMP - Grammar. boot camp. http://www.youtube.com/watch?v=7kdrsprznk8. define. what is grammar?. according to