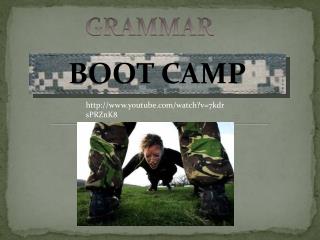 GRAMMAR. BOOT CAMP. http://www.youtube.com/watch?v=7kdrsPRZnK8. DEFINE. WHAT IS GRAMMAR?. According to Dictionary.com, grammar is a set of rules that is applied to a language. Ms. Valentine’s 10 Parts of Speech. Eight parts of speech make up the English language. Noun Adverb Grammar Boot Camp - . parts of speech challenge each group is responsible for one part of speech (with one exception–

Physical Boot Camp - . 5.5d identify changes that can occur in the physical properties of the ingredients of solutions

Life Boot Camp - . 5.10a #3 compare the structures and functions of different species that help them live and survive

Physical Boot Camp - . 5.6a explore the uses of energy including mechanical, light, thermal, electrical, and sound

Drafting Boot Camp - . why study drafting?. drafting is a form of graphic communication “a picture is worth a thousand