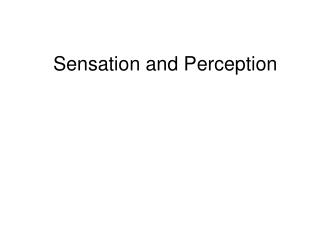 DO NOW: - . which sense would you be most willing to give up? which one would you least like to lose?. unit 4: sensation

Perception &amp; Consciousness - . unit 2. how do we sense our worlds ?. learning objectives distinguish between

Sensation - . chapter 5. sensation. the process by which our sensory systems (eyes, ears, and other sensory organs) and

Dysphagia - . dr.krisana thaitong. dysphagia. must be distinguished from globus sensation globus is a sensation of a lump

Sensation and Perception - Bringing the outside world into the