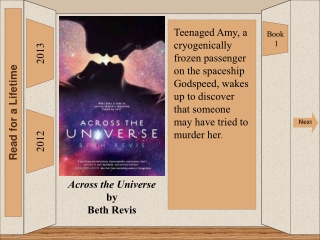 Teenaged Amy, a cryogenically frozen passenger on the spaceship Godspeed, wakes up to discover that someone may have tried to murder her. Book 1. 2013. Read for a Lifetime. Nex t. 2012. Across the Universe by Beth Revis. 2013 - . the scope of our operations haltik employs 436 people, 101 of whom are fixed-term employees. we have offices in