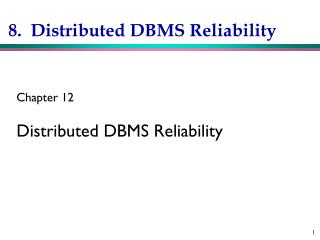 Validity and reliability - . in research. agenda. 1. 2. 3. at the end of this lesson, you should be able to:. discuss

Indices in a DBMS - . organization of records in files. heap – a record can be placed anywhere in the file where there

DISTRIBUTED COMPUTING - . fall 2005. road map: overview. why are distributed systems interesting? why are they hard?.