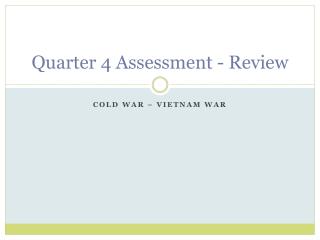 Quarter 4 Review - . what’s on the test mr. callow?. the final is made up of the following: 5 multiple choice 10

Quarter Two Assessment Review - . 2010. an internal conflict that charlie has in “flowers for algernon” is: . a.

FIRST QUARTER ASSESSMENT REVIEW - . microeconomics. the study of the behavior of individual players—such as

Quarter Review - . unit 3. of which elements are most living things composed?. what property makes carbon special for

2 nd /4 th Quarter Review - . who were the midnight judges? judges who received their appointments only hours before john