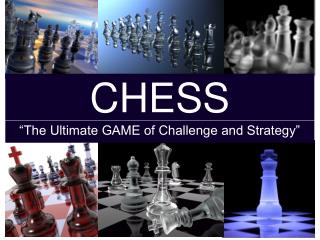 CHESS. “The Ultimate GAME of Challenge and Strategy”. About CHESS. A board game played by two people Each player controls an army of 16 pieces One army is black, the other white Each piece moves in a unique manner A game of strategy and concentration. The BASICS - Chess Pieces. CHESS - . table of contents. why play chess? setting up the board get to know the pieces check and checkmate what

CHESS - . table of contents. why play chess? setting up the board get to know the pieces check and checkmate what the

CHESS - . welcome. write what you already know about chess on a piece of paper which i will hand out now. now write the

Chess - . by kezia farley. what is chess. chess is a board game that is played between two people which is played on a

Chess - . by kyle fischer. what is chess?. chess is a game that you try to get the other person’s king in a checkmate.

Chess - . widely studied adversarial search problem most people are familiar with the game, yet it is still complex

CHESS - . royal game (also) for the smallest ones. worldwide chess it is estimated that over 1 billion people in the

Chess!! - . pawn. how many pieces? 8 value: lowest what can it do? move forward only one space at a time. attack: only

Chess! - . by : kamalanand sangamewaran. 1. how do you write chess notation?. you have to write you’re a b c’ s from

CHESS - . basics for beginners. board set-up the letters go across the board in front of you. “white on right!” each