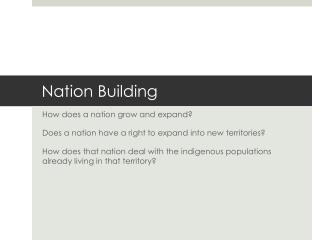 Nation Building. How does a nation grow and expand? Does a nation have a right to expand into new territories? How does that nation deal with the indigenous populations already living in that territory?. Haitian Revolution. Connection to our class? What did you learn?. Who is this?. Nation Building - . are we built to build nations?. nation building a dirty word?. stability operations a partnership to

Nation Building - . setting up new territories. problems of congress . many soldiers were not paid united states has no

American Colonies: Nation Building - . between 1607 and 1763, americans gained control of their political and economic

Building a New Nation - . project overview. step 1. you and your partner will pick one of the 56 signers of the