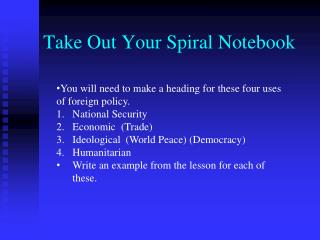 Take Out Your Spiral Notebook. You will need to make a heading for these four uses of foreign policy. National Security Economic (Trade) Ideological (World Peace) (Democracy) Humanitarian Write an example from the lesson for each of these. U.S. Foreign Policy. What is foreign policy?. Take out your notebook - . look at the worksheet page you did after the test. check your answers with those on the next

Interactive Notebook (Spiral Notebook) - . biotechnology i nielsen. what is the spiral notebook for?. basically, anything

Take out your notebook, pen and highlighter - . wwi: a new kind of war. ca standard: 10.5.4 understand the nature of war

Take out your notebook and title your page building atoms. - See me for a number. get with the person that has the same

Spiral Notebook: Vocabulary Section - . do now : attempt to make a sentence (or a string of sentences) using at least two

Get out your spiral and get ready to take notes! - . splash screen. lt 1a. chapter introduction section 1: the early

Please take out: a writing utensil your TBT books and your notebook - Then take everything else off of your desks!.

Take Out Your Journals - . you have 3 minutes to complete the vegetarian quiz in your journals. 1. how often do you eat

TAKE OUT YOUR INB - . turn to the page after the notes from yesterday about the articles of confederation title the page:

Take out your HW - Do now : take back your exit slips from last class; put them aside for now. take a clicker and take

*TAKE OUT YOUR HOMEWORK* - . objective: i can prepare to demonstrate my knowledge of how to use the different forms of

Take out your homework - . in your response section answer the following. was it difficult to find your two articles? why

Take out your handouts - . what did you learn from this research (the placards, the notes, etc)? put answer in

TAKE OUT YOUR NOTEBOOKS!! - . the sun also rises. by ernest hemingway. hemingway’s generation. hemingway wished to