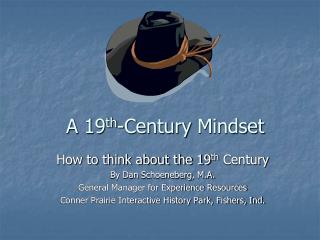 A 19 th - Century Mindset. How to think about the 19 th Century By Dan Schoeneberg , M.A. General Manager for Experience Resources Conner Prairie Interactive History Park, Fishers, Ind. . Introduction . A mindset- What is it? 19 th Century - . nationalism/reaction/revolt/reaction. age of -isms. many of the ideas and ideologies that shape our

19 th Century Realism - . • realism began in france as a reaction against romanticism (and the salon exhibition

The 19 th Century - . conditions that lead to the new growth revolutions cause colonizing monarchies to shrink the

19 th Century isms - . blame. the revolutionary zeal of the fr rev was blamed on enlightened ideals such as equality,

19 th Century Realism - . 1875-1915. realism. drama was to involve the direct observation of human behavior use

19 th century Imperialism - . &amp; the scramble for africa. the age of imperialism. imperialism = a policy of