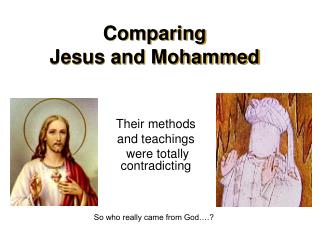 Comparing Jesus and Mohammed. Their methods and teachings were totally contradicting. So who really came from God….?. Jesus coming for last judgment. Postal stamp of Iran: Jesus weighing good and bad deeds on his second coming. Comparing and Contrasting - . what is it?. hmmmm, what do we need to think about?. write three ways you and someone in

Comparing and Contrasting - . point by point or side by side. pick your texts. one short story: “the story of an