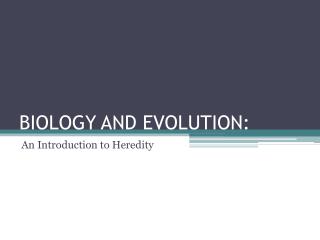 BIOLOGY AND EVOLUTION:. An Introduction to Heredity. Do Now:. Based on your homework, turn to a partner and discuss whether or not you feel that evolution is valuable or detrimental and why.  Make a T-Chart discussing both arguments. Valuable Unjust. Religion and Science. Chapters 1, 2 &amp; 9 - The quick &amp; dirty version what is biology? biology – the study of life involves

AP Biology: Math for Dummies - . big idea 1 the process of evolution drives the diversity and unity of life. change in

AP BIOLOGY - . what to expect?. what is ap biology?. curriculum is determined by the college board goal is to prepare you

Welcome to Evolutionary Biology (840:142) - . http://faculty.cns.uni.edu/~spradlin/evolution/home.html. so. you thought

Evolution - . biology review. charles darwin. known as the father of evolution wrote book on the origin of species sailed

Biology 11 - . unit 1: evolution lesson 1: why evolution??. by the end of the lesson you should be able to: explain why

Evolution - . schoonover. “nothing in biology makes sense except in the light of evolution .” – theodosius

Evolution of Genes and Genomes - . chapter 19. the impact of molecular biology on evolutionary biology has been so

Mutations and Evolution - . more on biochemistry and vertebrate evolution. from:

Welcome to AP Biology - . select a seat - that will be your seat for the year . new curriculum. focus on 4 big ideas