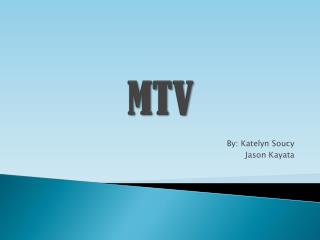 MTV killing America - . brian skarda. what is mtv?. mtv stands for music television. mtv was created, and owned by

MTV World Tour - . mtv reaches the most homes in which region?. asia! second highest is europe and the us is third. the

I Want My MTV - Mp3 i want my mtv the ethical implications of downloading mp3s what is the riaa? recording industry

MTV AND Product Placement - . heeryung &amp; winston . objectives. how has product placement in media such as music

Chapter - 12. chapter. the strategy of international business. established in 1987 &amp; owned by viacom majority of

Global Marketing The Youth of the world proclaim, We Want Our MTV