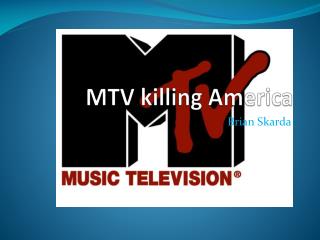 MTV killing America. Brian Skarda. What is MTV?. MTV stands for Music Television. MTV was created, and owned by Viacom, originally to show music videos, selected and aired by people that were called VJ’s, sort of like a DJ at a party. MTV first aired on August 1 st , 1981. MTV World Tour - . mtv reaches the most homes in which region?. asia! second highest is europe and the us is third. the

CORPORATE KILLING - . the impact on the liability market by debbie chantler. a charge of corporate manslaughter against

PENALTY KILLING - Introduction. . . philosophythe law or the rules of the penalty kill vs power playstatsdifferent