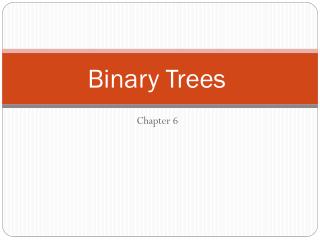 Binary Trees . Chapter 6. 6.1 Trees, Binary Trees, and Binary Search Trees . Linked lists usually are more flexible than arrays, but it is difficult to use them to organize a hierarchical representation of objects. BINARY TREES - . purpose: in this lecture series we will learn about binary trees. binary trees are another type of data

Binary Trees - . like a list, a (binary) tree can be empty or non-empty. in class we will explore a state-based

Binary Trees - . binary trees. sets and maps in java are also available in tree-based implementations a tree is – in