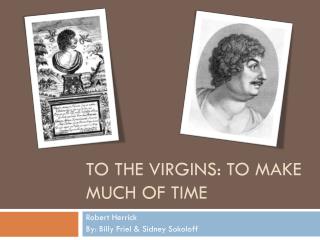 To the Virgins: To Make Much of Time. Robert Herrick By: Billy Friel & Sidney Sokoloff. Robert Herrick (1591-1674). Entered Cambridge University in 1613, graduating with a master of arts degree in 1620. Rise of the Machines - Automate your Development - When we talk about automation in software development, we immediately

Next - Immigration game. by keenan bryan. next. instructions. read a slide then click the arrow to make a choice. each

Mycoprotein - . penicillin review. where does penicillin come from? penicillium ; fungus does it make penicillin all the

DIHYDROGEN OXIDE!!!! - . read your info sheet. sustainability. make a list of things you want to see last beyond your

How to make the GSL work for you Platforms, Tools, and Services - . jennifer schaff, interim director genomic sciences

Does the welfare state make older workers unemployable? - . gilles saint-paul tse. why is the labor market for the

Time Series Analysis - . what is a time series?. a time series is any series of data that varies over time. for example

The American Paradox: “Everyone Deserves a Change and Yet You are Expected to Make it on Your Own&quot; - Poverty

Poject1 - Mymake, a simplified make program. poject1. overview. how does a make work? what does a makefile contain? how

Finding Fractions Throw 2 dice and make a fraction, e.g. 4 and 5 could be 4 fifths of 5 quarters. Try and make a true s

New Year’s Resolution: Good Oral Health - The year 2016 has begun, and it is time to make some changes. one important

Chapter 9: Mathematics of Finance - . 9-1: time value of money problems. whenever we take out loans, make investments, or