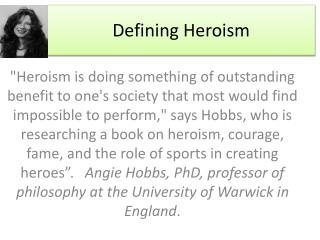 THEMATIC ANALYSIS: Heroism - . unit 3 aos1. learning intention: identify how the theme of heroism is explored in the text

“A Mystery of Heroism” - . by stephen crane. biographical information p. 484. how many children were in crane’s

Epic Heroism in Anglo-Saxon Literature - . epic definition. an epic is a long narrative poem that relates the great deeds

Defining Abnormality - . how would you define normal and abnormal?. map to spec – page 58 . 1. definition of the

Defining Modernism - . modern versus contemporary: where the “contemporary” refers to time, the “modern”