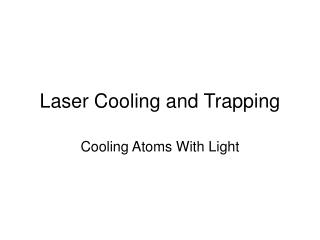 Laser Cooling and Trapping. Cooling Atoms With Light. Scattering (Radiative) Force. Velocity Change. The momentum transfer during absorption will cause the atoms to change velocity The photon frequency must be approximately equal to the atoms’ resonance frequency. 1. 2. Doppler Shift. LASER - . prof.dr.gehan mosaad. at the end of the lecture the student should be able to. define laser and know its

cooling for BGV modules - . trying to collect information toward a specification document mostly of the cooling system,