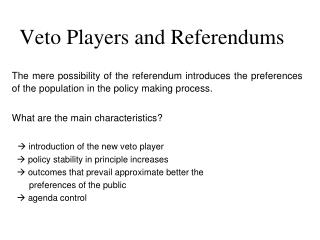 Veto Players and Referendums. The mere possibility of the referendum introduces the preferences of the population in the policy making process. What are the main characteristics ?  introduction of the new veto player  policy stability in principle increases Veto Players - . brintnall- â€œone enabling factor for the climate of seeming failure was the academic environment of

Veto Players - . veto player. veto players are individual or collective actors whose approval is necessary to change the

Bureaucracies and Veto Players - . both the judiciary (when making statutory interpretations) and the bureaucracies can

Macroeconomic policies and Veto Players - . two aims and three topics. aims: to show that policy stability does not refer

Referendums - . aims and objectives. to understand what a referendum is to identify how referendums are used to assess

Veto - . power of the president to reject the acts of congress. anti-federalists. those who opposed to ratifying the

The Progressive Movement II: Initiatives and Referendums - . reader available after class, $20 discussion ?s at end. the

Quick test on referendums - . which referendum was held in 1975? in what year did wales and scotland vote in favour of

Chadha and the Legislative Veto - . sct held that legislative veto violated the constitution because it was an exercise

Chadha and the Legislative Veto - . sct held that legislative veto violated the constitution because