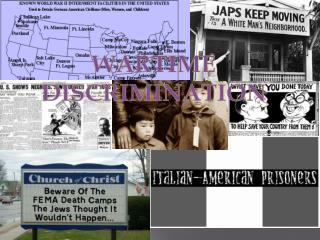 WARTIME DISCRIMINATION . Treatment of the Japanese in the US. Anti-Japanese Paranoia Large migration of Japanese in the West Coast Hysterical frenzy growing from attack on Pearl Harbor Executive order of FDR (Executive Order 9066) Mistreatment Wartime Migration - . many of the 15 million mobilized for the war chose not to return home after 1945 war industries

Wartime Memories - Slide to delete. wartime memories. this file is ready for children to edit – writing about the pics

Wartime Propaganda - . the posters that influenced the home front. what does propaganda mean?. random house dictionary

Wartime Propaganda - . objectives of wartime propaganda. recruitment of soldiers or other wartime personnel(either

Wartime Propaganda - . propaganda : a form of communication that is aimed at influencing the attitude of a community

WARTIME DIPOLMACY - . and the emancipation proclamation sept 1862. lincoln’s primary goal. at the beginning of the war

Wartime Battle - . solving equations by graphing. you’re in the navy now. identify where to place mines to sink enemy

17 – 4 - . the home front. opportunity and adjustment. how did the war affect american workers? how did the growth of