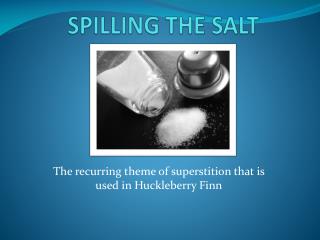 SPILLING THE SALT. The recurring theme of superstition that is used in Huckleberry Finn. WHAT IS SUPERSTITION?. Merriam-Webster defines superstition as: -A belief or practice resulting from ignorance, fear of the unknown, trust of magic or chance, or a false conception of causation. Spilling Salt - . by kaitlyn . superstition definition . a belief in a supernatural leading to a consequence like bad

Spilling the Beans - . joint convention 2009 presented by: john swanson, tie. secrets which are hard to grasp in their

The Salt Covenant - . covenant of salt is found in 3 places in scriptures. in regards to the offerings of the children of

WHERE’S THE SALT? - . how much salt do you eat every day?. are you feeding your family too much salt?. the right amount

Bathroom Repair for spilling hand shower - A hot shower can fix your horrible days and cause you to feel energized. in