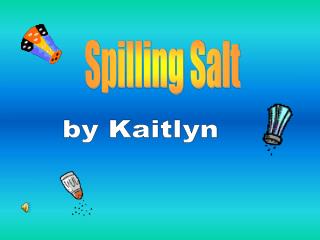 Spilling Salt. by Kaitlyn . Superstition definition . A belief in a supernatural leading to a consequence like bad luck. Spilling salt Origen. Spilling salt is a warning from an angle that the devil is near by so you throw salt over your left shoulder to make the devil go away. SPILLING THE SALT - . the recurring theme of superstition that is used in huckleberry finn. what is superstition?.

Spilling the Beans - . joint convention 2009 presented by: john swanson, tie. secrets which are hard to grasp in their

Bathroom Repair for spilling hand shower - A hot shower can fix your horrible days and cause you to feel energized. in