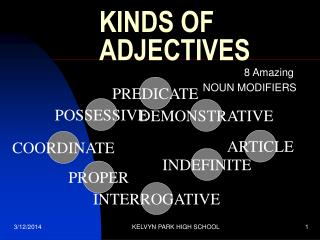 Adjectives - List of Adjectives, Adjectives in English | GrammarCollege.com - What is verb ? learn about verbs, modal

Kinds of Verbs - 3-1 p. 100 as you know, every sentence has two parts, the subject and the predicate. the key word in

Kinds of Psychotherapy - . part 1 . objectives summarize therapy . describe what a psychotherapist does what is

Kinds of VERBS - . prepared by: baibon aiza m. gani. read the passage : list down all verbs you can find in the passage

Kinds of evidence - . positive evidence : example utterances that occur in the input which model the grammatical

KINDS OF COMAPANIES - . definition of company. according to companies act ,” a company formed and registered under this

Kinds of Mitzvot - . mishpatim ( ×ž×©×¤×˜×™× ordinances): commandments for which reasons can be given hukim