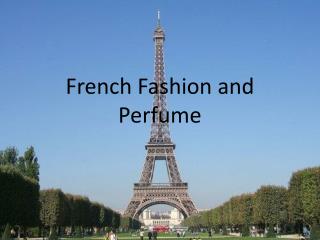 French Fashion and Perfume. Famous French Fashion Designers. These designers had a timeless sense of fashion and were able to express themselves through their clothes . Coco Chanel. Born August 18, 1883 died January 10, 1971 Founded the Chanel brand. Louis Vuitton. French Fashion and Perfume - . by: kerri, olyvia, and margot. famous french fashion designers. these designers had a

French fashion - . paris is one of the fashion capitals of the world. each year people flock to paris for fashion week to

Perfume and Unique Perfume Boxes - They could be custom-made with any special color. nowadays, the expert printing

Perfume - . setting: grasse shannon clery amit oz. why/how does grenouille find himself in this setting? does he choose

Discount perfume and cologne - So donu2019t let anybody else decide for your smell. that is exactly what happens when you

COSMETIC AND PERFUME SETS - Would you like to give the gift of a set of perfumes or cosmetics?