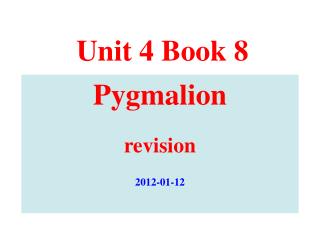 Book four Unit 8 Thanksgiving - Lesson 30 (give a title for this story). 李春艳. americans are celebrating

Vocabulary Book II – Unit 4 - . vocabulary objectives. you will be able to: match word to definition use the word in a

Math 8 Unit 4 - . functions and relations. which of the relations below is a function?. irespond question. multiple

UNIT 4, LESSON 8 - . so what does it take to be an empire? a look at global patterns, examples, and non-examples.