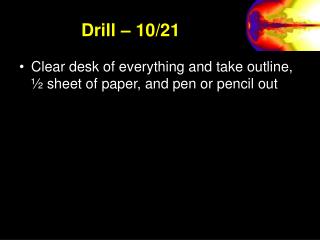 Drill – 10/21. Clear desk of everything and take outline, ½ sheet of paper, and pen or pencil out. Pop Reading Quiz. What is the energy released when a nucleus is formed from nucleons called? Layers of Product Concept - . the core product. consists of all the benefits the product will provide for consumers or

All Integer Subtraction Facts to + /- 10 - . beat the computer drill. directions. a slide will appear with a problem. say