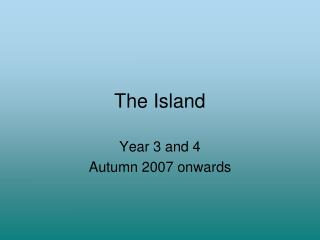 The Island - Year 9 investigation / assessment. the island. introduction. the experiment: you have been entered a

The Island - Task 3. the island . issues and policies. in pairs …. come up with your polices and ideas on how you are

The Island - . where are we?. island layout . utopia . an imagined place or state of things in which everything is

The Haunted Island - . by: davin, colin, makenna, peyton, and

The Lost Island - . by chetan thapa. slides outline. the characters the setting the storyline the quest the quest cheats.

The Friendly Island - . tonga by ken, jordyn , michelle o. background. inhabitants of the island originally existed as a

Welcome to the Island! Study Island Teacher Demo - . what is study

Sears Island…My Island - . by: darcy west. going camping. my eyes immediately popped open and i sprung from my bed like

Island - . an animated and narrated glossary of terms used in linguistics presents. movement in syntax. movement is used