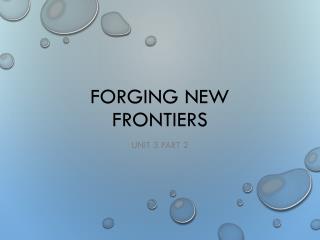 NEW FRONTIERS - . chapter 9. learning objective. by the end of the lesson, students will be able to distinguishing facts

Gene Expression new frontiers - . …the processes by which information contained in genes and genomes is decoded by

Slavery and New Frontiers - . romans of course had slavery: how was it different from what americans think of as

Forging a New Nation - . what type of government did the colonists have during the colonial era?. monarchy  king of