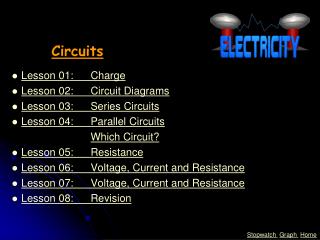 Circuits - . energy &amp; environment. simple circuit. what symbols are shown here and what do they do?. connect

Circuits - . chapter 35 notes. review: series circuits. electric current has only one pathway through the circuit the

Circuits - . drill: what is the resistance of a fan, if there is a potential difference of 50v and the current flowing to

Circuits - . how a blender gets power. a generator at a power plant produces a voltage difference across the outlet

Circuits - . series and parallel. ohm’s law. in a very isolated situation, we know that: v = ir but how does this apply

Circuits - . q1. what do you call an electric circuit with components placed one after the other?. a1. a series

Circuits - Home. circuits. home. which circuit is built so that if one lightbulb goes out, the other three

Circuits - . parallel resistors checkpoint. two resistors of very different value are connected in parallel. will the

Circuits - . electrical symbols. +. -. important reminders and terms. the flow of electricity always travels around the

CIRCUITS - . chapter 13.3. electric circuit. an electrical device connected so that it provides one or more complete

Circuits - . q1. what do you call an electric circuit with components placed one after the other?. a1. a series circuit.