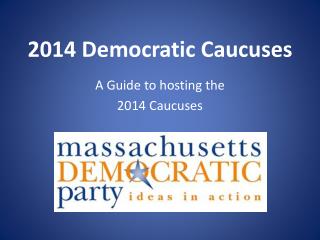 Primaries and caucuses - . definition. a primary is an election to choose a party ’ s candidate for elective office

Iowa Caucuses - . an imperfect political weather vane. “if the iowa caucuses meant anything, we’d all be talking

Precinct Caucuses: - . getting ready for the 2010 elections. minnesota council of nonprofits and commission of deaf,

Congressional Caucuses - . 112 th congress– approx. 200 caucuses in the house purpose: organize based on an

Primaries, Caucuses, and Conventions - . the road to the white house. background info. no national primary each state

Organization of Congress: Parties and Caucuses - . congress is not a single organization instead it is a vast and

Democratic Ideals - . by trish henry. life. you have the right to live without the fear of injury or being killed by

DEMOCRATIC SCHOOLS - . why we need them and what they look like derry hannam idec 2012, caguas, puerto rico march 2012.