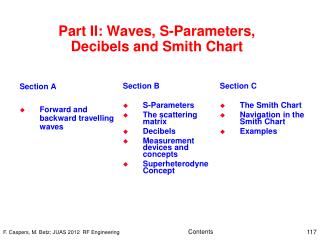 Mod 4 Cable Testing - 2. overview. students completing this module should be able to: differentiate between sine waves

KWL Chart on WAVES - . what are waves?. a wave is a disturbance that transfers energy from place to place. energy is the

Unit 5, Part 1: SOUND - . waves. swbat explain how waves are created and identify the different types of waves. what do

Waves - . activity. in your notebook, make a list of some things you know about waves. include examples of waves, and any

Waves - . waves. waves play roles in our daily lives, including our effort to communicate. waves have parts and shapes

Part 3: Estimation of Parameters - . estimation of parameters. most of the time, we have random samples but not the

Decibels, Filters, and Bode Plots - . objectives. develop confidence in the use of logarithms and decibels in the