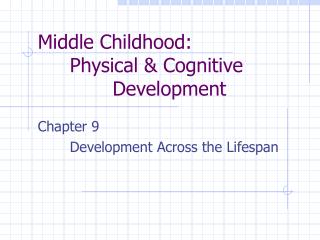 Physical Development in Infancy - . questions. what is neoteny? what are the basic patterns of physical growth in

The Cognitive Dog - . class 8: temperament and puppy tests. agenda. papers next week finishing up from last week on

Chapter 6 PHYSICAL DEVELOPMENT: THE BRAIN, BODY, MOTOR SKILLS AND SEXUAL DEVELOPMENT - . an overview of maturation and

How Does Our Thinking Change With Age? - . chapter 6- theories of cognitive development. module objectives:. how does