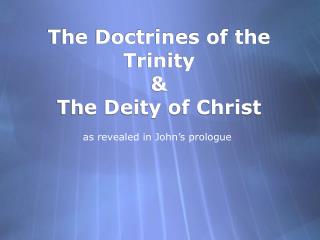 The Doctrines of the Trinity & The Deity of Christ. as revealed in John’s prologue. Summary of John’s Prologue. A Personhood. A Personhood. Ontological Trinity. The God. The Word. Common Divine Nature. Three Persons One Nature. The Holy Spirit. Common Nature, Attributes, Essence. The Blessed Trinity - . and our christian vocation. the blessed trinity. chapter 4. chapter 4. the life and teachings of

THE BIBLE, DOCTRINE, AND YOU! - . doctrines that allow. doctrine one. the verbal, plenary, inspiration of the bible.

The “Rapture” - . lots of discussion in christian community about it today!. hal lindsey – “ the late great