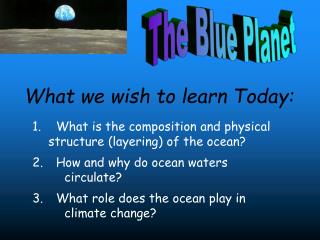 What we wish to learn Today:. The Blue Planet. What is the composition and physical structure (layering) of the ocean? How and why do ocean waters circulate? What role does the ocean play in climate change?. Causes of Climate change. A. Tectonic. B. Orbital. Connecting with Computer Science, 2e - . chapter 1 history and social implications of computing. objectives. in this

Lesson 9 Dipoles and Magnets - . today we will: learn the definitions of electric and magnetic dipoles. find the forces,

Chapter 4 - . supporting processors and upgrading memory. objectives. learn about the characteristics and purposes of

Session 1 Nautical Charts - . even though you have taken a navigation course before…. …you will probably learn some

Class 2 - . today we will: learn the basic characteristics of the electrostatic force review the properties of conductors

Outline for Today - . objectives: to introduce the critical section problem . to learn how to reason about the

Chapter 3 - . all about motherboards. objectives. learn about the different types and features of motherboards learn how