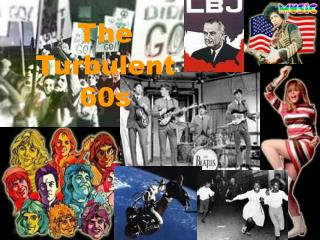 The Turbulent 60s - . the 1960s were in many ways both the best and worst of times. on the one hand, the postwar economic

The Turbulent 60s - . times of change. in the beginning…. jfk in office “new frontier” of social change public

THE TURBULENT ’60s - . the warren court. dwight d. eisenhower nominated earl warren to be chief justice of the united

The Stormy ’60s - . chapter 38. decade of upheaval. at the end of the complacent 1950s nobody foresaw how stormy and

Germany in the 60s - . politic situation. germany was divided into two parts → direct collision of capitalism and

The 50s and 60s - . cold war conflicts. what is the cold war?. a state of hostility between the united states and the

Slang In the 60s - . by: artemis, brooke, and vincent. understanding the slang. slang is an improper way of using words.

Movies in the 60s - . the end of the hollywood studio system the era of independent, underground cinema . content.

60s groups - The 60s is known as the golden age of pop, a time when this music was fresh and new, a time too when some of

End of the 60s - . chicano movement and cesar chavez race riots students for democratic society end of the happy hippies:

The Turbulent 1960s - . - from the new frontier to the great society - expanding movements for civil rights - cold war