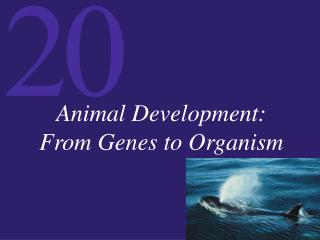 Organ Systems Week 1 - . lpa 2013-2014 standard 3. monday objective. i will describe the structure and function of animal

Lecture 17 Chapter 9 Marker genes - . neal stewart. discussion questions. 1. why use marker genes? 2. what are some

What is the biggest organism ever? - . apatosaurus ?. blue whale?. coast redwood?. none of the above – it’s a fungus.

Chapter 12 - . section 12-1: identifying the substance of genes. how do genes work?. first step was to identify what

Genetics - . phenotype/genotype. phenotype is what an animal looks like phenotype = genetics + environment (+gxe

Chapter 4 Prenatal Development and Birth - . germinal: the first 14 days implantation occurs about a week after

Animal Development - . the question of how a zygote becomes an animal has been asked for centuries as recently as the