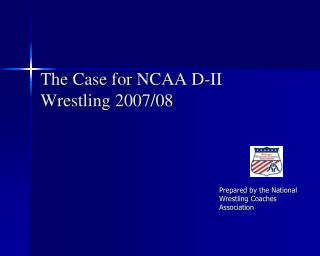 The Case for NCAA D-II Wrestling 2007/08. Prepared by the National Wrestling Coaches Association. Historical Background of Wrestling. Intercollegiate wrestling has been in existence over 100 years. Assessment Form - Established in 1928 to serve, protect, & promote amateur wrestling ... the establishment of a

NCAA Division I Newly Adopted Legislation - . agenda review of ncaa division i proposals adopted in the 2010-11

Family Engagement in Case Planning &amp; Case Management Version 2.1, 2011 - . goals for the training. in this