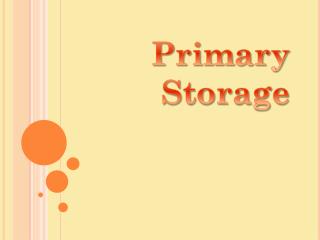 Primary Storage. Memory. This is located on the motherboard so that data can travel quickly to and from the cpu. Data can be stored in the memory and it can be accessed to be read from, written to or processed. There are several types of computer memory: Primary Storage - . primary storage is the storage that is directly available to the cpu. it is also known as: main

Primary - The vikings. primary. a viking longship. the ships had one large square sail. in bad weather it was lowered

Primary - . primary sources means that it is original article or book created by an individual or sometimes a group of

primary - Motivation : the mean-time-to-failure of the systems is decreasing with growing number of cores . problem will