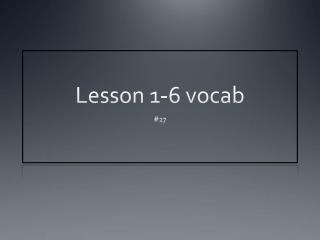 Lesson 1-6 vocab. #27. Lesson 1. Clandestine the bees were very upset with the bear for stealing their honey and being so clandestine about it. covert. The C ountry is a C overt place at times. Lesson 1. Furtive. Lesson 1 Vocab - . “the story of an eye-witness” by jack london. colossal. extremely large. the colossal building was

Lesson 1 Vocab - . “the story of an eye-witness” by: jack london. colossal. extremely large. that squid is very

Lesson 1 vocab - . lurid. out of control fire. cunning. sneaky the cat is very cunning. debris. junk the is a lot of

Chapter 1 Lesson 1 Vocab: - . prehistory: the period of time before people began to write. archaeology: the study of

Vocab Lesson 6: Learn new words ! - . directions: complete the chart and submit on the day of the vocab quiz. accede .

Vocab 6 - . 1) anarchy – total absence of government government officials fled the country leaving it in a state of