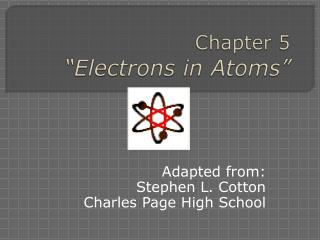 Chapter 5 “Electrons in Atoms”. Adapted from: Stephen L. Cotton Charles Page High School. Chapter 5.2 Models of the Atom. OBJECTIVES: Compare the Bohr and quantum mechanical models of the atom. Define a quantum of energy, and explain how it is related to an energy change in matter. Chapter 6 Electronic Structure of Atoms - . or “how i learned to stop worrying and love the electron”. problems with