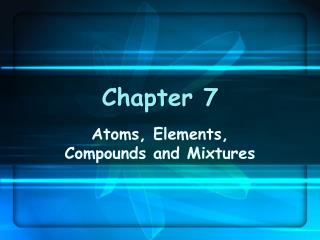 Chapter 7. Atoms, Elements, Compounds and Mixtures. 7.1 Structure of an Atom. OBJECTIVES: Summarize how models of the atom have changed. Name and describe parts of an atom Calculate the number of protons, neutrons and electrons in an atom given its mass number. Structure of an Atom.