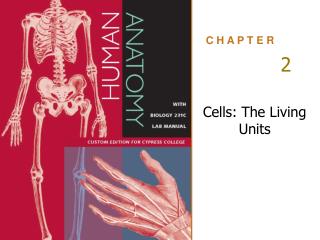 2. Cells: The Living Units. C H A P T E R. Goals. By the end of this lecture you should be able to describe …. Similarities and differences between cells Why cells look and function differently The function of organelles in a typical eukaryotic cell How proteins are made TISSUE: THE LIVING FABRIC - . introduction to tissue. tissues are groups of cells that are similar in structure and

BIOLOGY END OF COURSE TEST STUDY GUIDE Content Domain 1: Cells - The ________ is the basic unit of structure and

Organization of the Cell - . cell theory. cells are the basic living units of organization and function in all organisms

Unit 1 Cells and Cell Processes - . 1.1 characteristics of living organisms. what you need to be able to do: list and

AIM: How did Scientists discover cells? - Do now: list at least 3 cells in your body and explain their function. hw:

The Cell Theory - . a. all living organisms are made up of one or more cells b. the cell is the basic unit of life c. all