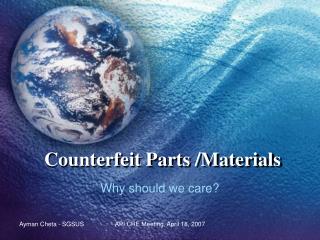 Counterfeit to Counter - . this is a collaborative project with coventry cyrenians (cc), (a charity for the homeless) and

Team for Counterfeit Medicines - . 24-25.08.2009. combating counterfeit medicines in poland - beginning. in april of

Counterfeit Christs A study of false saviors and false salvation - . &quot;therefore i said to you that you will die

Counterfeit Drugs - . megan penecale. what is it?. people sell fake drugs online or on the streets for cheaper price so